This is the “chief of sinners,” Daniel Whyte III, president of Gospel Light Society International, with the Gospel Light Minute X Podcast #395 titled, “How to Face the Inevitable –Your Death” I’m here to remind you of what the Bible says, that “Christ Jesus came into the world to save sinners” like you and me.

I have found that one can tell how a person values life by his estimation of death. I once talked with a man who had never given serious thought to death until it was discovered that he had cancer. “Immediately my entire world changed,” he said. “The things I valued most became worthless, and the things that I thought were of little value are now the most important things in the world to me.”

GETTING READY FOR ETERNITY

Physical life is a possession that we all cling to, and yet we know we must all sooner or later bow to death. It enters the home of the rich as boldly as it enters the apartment in the projects. It brings down the final curtain as swiftly on the famous as it does on the unknown. Before this year ends, many people listening to this podcast will keep their appointment with death.

There are many who say, “I believe in life after death, but I’m not concerned about crossing that bridge until I get to it.” How strange that people should spend years preparing for retirement and not take so much as five minutes to prepare to meet God END_OF_DOCUMENT_TOKEN_TO_BE_REPLACED

This is the “chief of sinners,” Daniel Whyte III, president of Gospel Light Society International, with the Gospel Light Minute X Podcast #390 titled, “Are You Ready for a Change?” I’m here to remind you of what the Bible says, that “Christ Jesus came into the world to save sinners” like you and me.

Fueled by unfulfilled promises, unrealized hopes, and increasing difficulties, “It’s time for a change” has become a common theme with both politicians and the general public.

THERE HAVE BEEN CHANGES IN THE PAST

Within the recent past, changes have occurred with surprising suddenness. Governments once thought to be stable have been toppled. Financial institutions have failed. Once-successful businesses have collapsed. Even more significantly, the moral fabric of society has been shattered by turning away from God and the principles of His Word, the Bible. The “do what feels good” mentality—casting off restraint and rejecting authority—has broken up families and ruined lives. This is nothing but lawlessness, the essence of sin, which has brought the disillusion, disease, death, and destruction we see all around us. END_OF_DOCUMENT_TOKEN_TO_BE_REPLACED

This is the “chief of sinners,” Daniel Whyte III, president of Gospel Light Society International, with the Gospel Light Minute X Podcast #384 titled, “You May be a Faithful Member of a Church, But on Your Way to Hell.” I’m here to remind you of what the Bible says, that “Christ Jesus came into the world to save sinners” like you and me.

How clear and concise: there should be neither confusion nor contradiction. There are many names under Heaven in which we can find religion; but salvation can be found in One only. The Bible says in Romans 3:23, “For all have sinned…” So, all need a Saviour; Romans 6:23 says, “For the wages of sin is death; but the gift of God is eternal life through Jesus Christ our Lord.” At Calvary, Jesus paid sin’s awful penalty for all who accept Him; but His death there was not to give men a religion; it was to provide Salvation through redemption.

There is no salvation in priests, penance or prayers; but only in Jesus Christ. Service and sacraments, churches and charities, tears and treasures, ritual and reformation — ALL are alike, helpless to save.

Men are willing to take the high place in the work and rituals of the church while refusing to take the low place of guilty sinners needing a sinner’s Saviour, Jesus.

Men are willing to believe in the moral precepts of God’s Word, as based on the Ten Commandments while refusing to believe in, rest on, and receive God’s Son, Jesus Christ, as Saviour of their souls, because of His finished work in their behalf at Calvary. END_OF_DOCUMENT_TOKEN_TO_BE_REPLACED

This is the “chief of sinners,” Daniel Whyte III, president of Gospel Light Society International, with the Gospel Light Minute X Podcast #372 titled, “Where Do You Think You Are Going?” I’m here to remind you of what the Bible says, that “Christ Jesus came into the world to save sinners” like you and me.

If you’re like me, there’s nothing better after a busy day than settling into a favorite chair and just sitting still. But did you know that even while sitting still, we are still traveling thousands of miles per hour? Because of the earth’s rotation and its movement within the solar system and galaxy, we are hurtling through space at unimaginable speeds.

It’s amazing that we can be moving at such a high rate of speed and not be aware of it. But, in the same way, there are many people today who are speeding through life unaffected by how quickly they are approaching eternity.

Though we are all traveling through time and space together, there are different destinies in eternity. Where will you spend eternity—in Heaven or in Hell? Just think of being in an everlasting place of perfect happiness, or in a never-ending place of pure woe. You will be in one of these forever. END_OF_DOCUMENT_TOKEN_TO_BE_REPLACED 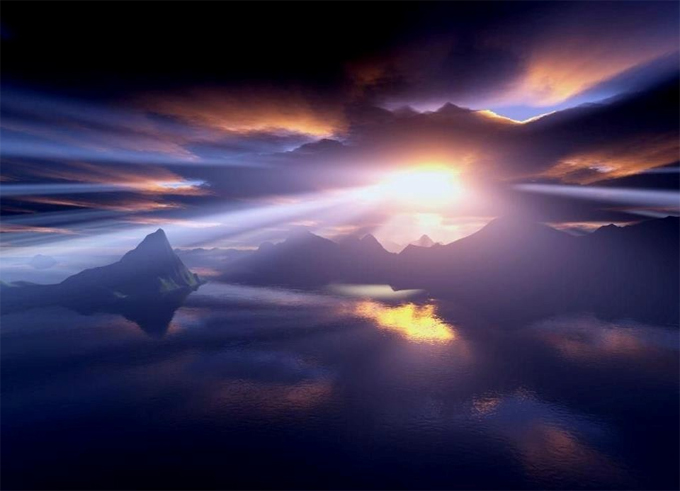 2 In the day of my trouble I sought the Lord: my sore ran in the night, and ceased not: my soul refused to be comforted.

3 I remembered God, and was troubled: I complained, and my spirit was overwhelmed. Selah.

4 Thou holdest mine eyes waking: I am so troubled that I cannot speak.

5 I have considered the days of old, the years of ancient times.

6 I call to remembrance my song in the night: I commune with mine own heart: and my spirit made diligent search.

END_OF_DOCUMENT_TOKEN_TO_BE_REPLACED

Legend has it that the Trojan War began when Paris, the son of the King of Troy, stole Helen, the wife of the King of Sparta and married her. As a result, the various Greek city-states united to fight the Trojans after Paris refused to give the Spartan king’s wife back to him. The war dragged on for nine years until the Greeks finally prevailed.

It is hard to imagine that a war would last for so long and cause many thousands of deaths over a single human being. But, did you know that there is a war being fought right now over you? Yes, there is a battle that has been going on for thousands of years, and you are the center of this battle. Our passage for today reveals the sides in this great battle.

The oft-quoted verse of John 3:16 has long been celebrated as a powerful, succinct declaration of the Gospel. Charles Spurgeon said John 3:16 is “the gospel in a nutshell.”A.W. Tozer said, “Jesus Christ came to save you, knowing your name, knowing all about you, knowing your weight right now, knowing your age, knowing what you do, knowing where you live, knowing what you ate for supper and what you will eat for breakfast, where you will sleep tonight, how much your clothing cost, who your parents were. He knows you individually as though there were not another person in the entire world. He died for you as certainly as if you had been the only lost one. He knows the worst about you and is the One who loves you the most.”

As we read on in verse 17, we see that Jesus did not come to condemn the darkness of the world — he did not come to punish and destroy. He came to save. He came to shine light in a dark place. As the philosopher Francis Bacon said, “In order for the light to shine so brightly, the darkness must be present.”When Jesus Christ came, he turned the oppressive religious system of the day on it’s head. He brought something to the world that no one had ever experienced before.

However, there are dark forces that do not want people to believe on the son of God. They are doing everything they can to hide the light of Christ from every person’s eyes. Today, I want us to focus our attention on verse 19 as we now take a look at this force of darkness, this supernatural battle, and what is at stake in this fight.

+ Plus, listen to Fred Hammond as he sings “This is the Day” and Ricky Dillard singing “Jesus Paid It All”.