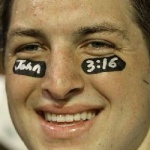 He is known as one of the greatest players in the history of college football. He led his team, the Florida Gators, to two NCAA National Football Championships, was the first ever sophomore to win the coveted Heisman Trophy and the first college football player to both rush and pass for 20 or more touchdowns in a single season. He was the first round NFL draft pick in 2010. Born to missionary parents in the Philippines, he gave his life to Christ and sees his football success as a by-product of his Christian faith and ministry and dedication to
spreading the Gospel. His name is Tim Tebow.